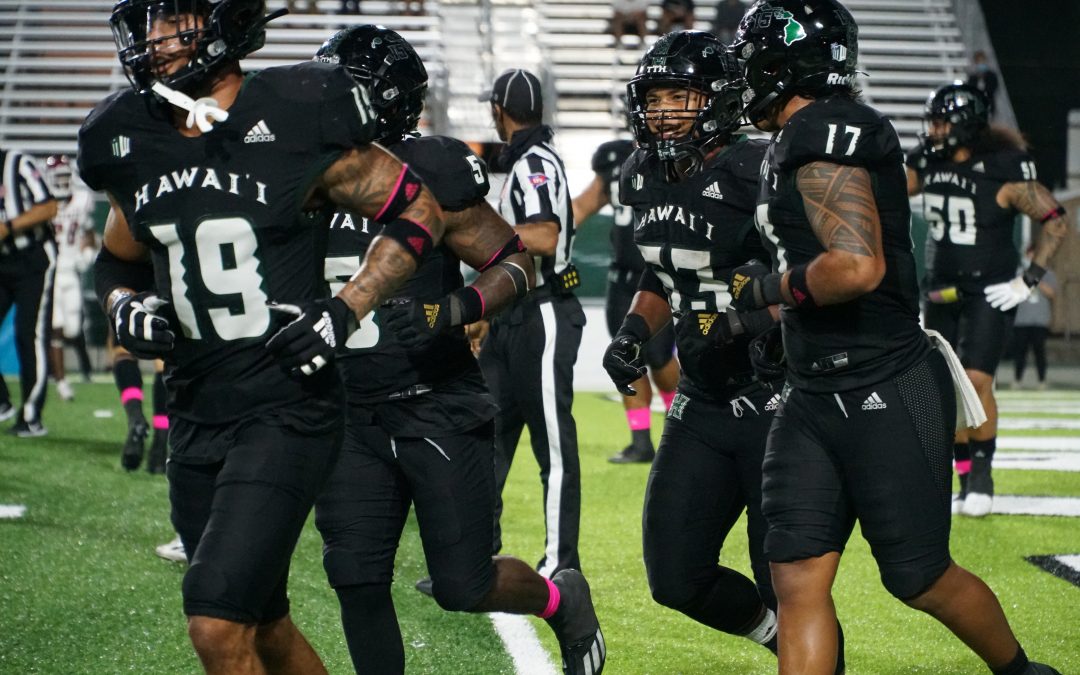 The 6-1 junior out of Saint Louis School has thrown for 6,167 yards and 45 TDs in his career at UH and became the only player in program history to surpass 6,000 yards passing and 1,000 yards rushing.

The 2021 college football season is officially over for many student-athletes and within the last couple of days we’ve seen announcements via social media regarding players’ decisions to stay with their current program or continue their careers elsewhere. Most notably, one of Hawaii’s best defensive players Darius Muasau confirmed that he is returning to UH for his senior season.

Muasau, a 6-1 linebacker from Mililani High School, finished the season with 109 total tackles (64 solo), 7 sacks, 5 forced fumbles, a 75-yd interception for a touchdown, and was named to the 2021 All-Mountain West First Team.

On the other hand, notably leaving is UH’s starting running back, sophomore Dae Dae Hunter. Hunter played 19 games for the Rainbow Warriors and accumulated 834 rushing yards, 234 receiving yards, and 7 touchdowns.

Also announcing his decision to enter the transfer portal was DB Donovan Dalton (grad transfer). Dalton had 41 tackles for UH (21 solo) in 39 games played for Hawai’i.

I ❤️ you HAWAI’I,
Next chapter🙏🏽 pic.twitter.com/VhjDtKzwqW

Around the country, many other student-athletes announced their decision to enter the transfer portal including UCF’s Junior QB Dillon Gabriel (Mililani High School) who is predicted to be going to Ole Miss. Despite missing majority of the 2021 season due to injury, Gabriel managed to pass for over 8,000 yards and 70 touchdowns during his time with the Knights.