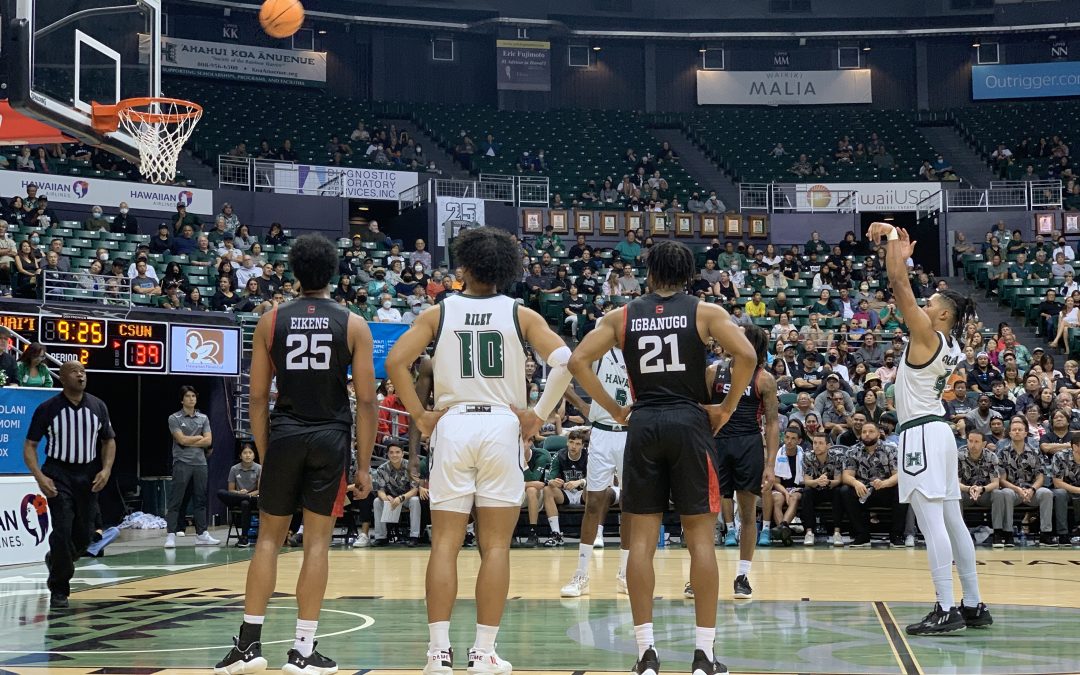 MANOA — It was not pretty, but the Hawai’i men’s basketball team took care of business last weekend.

“It’s nice to [learn from mistakes] after a win,” head coach Eran Ganot said before leaving Tuesday. “There’s things we said after the game that we need to do better, where we lapsed and that [CSUN] exposed.”

It was a heated battle between rivals, as usual with the Beach. The physicality seemed to impact Hawai’i early on, as UH struggled to get any consistency on the offensive end to begin the game.

The top-rated defense in the Big West came to play though, keeping the ‘Bows in the game. The defense gave the home team a chance to surge ahead right before halftime with a flurry of field goals and free throws to take the lead, 30-27, heading into the locker rooms.

A back-and-forth second half wouldn’t see the ‘Bows break through until under eight minutes left, when Hawai’i would grab ahold of the lead again and not let go. Free throw shooting was critical down the stretch as the ‘Bows downed the Beach.

Monday’s matchup with CSUN looked to be a great game for the ‘Bows to use before leaving for a trying road test, as Hawai’i used its defense to hold the Matadors to just 21% shooting from the field in the first half en route to a 33-17 halftime advantage.

The visiting Matadors came out of the locker room with a vigor, outscoring the Rainbow Warriors 26-11 during the first 12 minutes of the second half, cutting the UH lead to 44-43 going into the under-eight minutes media timeout.

The Matadors come out of the locker rooms looking re-energized, scoring a quick 10 points to cut the Hawai’i lead, 38-27.

‘Bows have been short on shots to start. #GoBows

Hawai’i was able to hold off the furious second half charge from the Matadors, using quality free throw shooting and rebounding to finish off visiting CSUN. The ‘Bows moved to 14-4 overall and 5-1 in Big West play as they hit the road for a pair of key conference matchups.

Hawai’i will first visit UC Irvine, who currently sits one spot below the ‘Bows in the Big West standings, on Thursday, January 19.

The Anteaters are perennial threats in the Big West, with the 2022-23 season being no different. UC Irvine leads the conference in scoring, averaging over 77 points per game this season, shooting an insane 40% clip from 3-point range.

The ‘Bows head into the game looking to their vaunted defense to lead the way. Hawai’i ranks first in the Big West, allowing opponents just 60 points per game, holding other teams to just 27.2% from 3-point range.

In other words, look to Thursday’s matchup between Big West foes to be a battle of strengths.

One x-factor for the ‘Bows? Ball security.

Hawai’i has remained unbeaten in games that the team commits 11 turnovers or less. Taking care of the ball is something that remains important to the team, especially heading into a raucous environment against a ball-hawking defensive scheme of UC Irvine. The Anteaters have 130 steals on the season, ranking third amongst Big West programs.

“I think most of our turnovers come from being too tentative,” point guard Jovon McClanahan theorized Tuesday. “Trying to get up more shot attempts, I think we’ll be better about our turnovers. The more shots we get up, the more chances we have to make shots.”

The Rainbow Warriors then will set their sights on UC Riverside, who sits atop the Big West standings with a 6-1 conference record. Though the message from coaches remains to not get ahead of one game at a time, what is on the line during this road trip isn’t completely out of mind.

“I think we know what’s at stake,” Ganot said Tuesday. “These guys are intelligent, young men. We’re process-driven, focused on the now. If we skip steps, we’ll get burned.”

With a potential share of the top of the conference, if not a lone place at the peak, the ‘Bows hit the road locked in with a mission on the mind.

“The more success you have, the more competition you’ll get and that’s what you live for,” Ganot told his team. “We’re gonna be playing against a really good team.”