MANOA — The night started with another Rainbow Warriors coronation.

The 2021 NCAA Division I Men’s Volleyball national champions found the peak so nice, they did it twice. Hawai’i took down fellow Big West powerhouse Long Beach State in the 2022 national title game to defend the crown that currently resides with the ‘Bows.

The difference between that team and this one?

Hawai’i was replacing many of the key contributors to the 2021 title run last season, showing off the depth that head coach Charlie Wade has continued to develop during his run at the helm of the men’s volleyball program.

This season, the ‘Bows returned everyone.

The season for the Hawai’i men’s volleyball team began on Thursday evening with a strong showing against sixth-ranked Ball State, taking a 3-1 decision to open the season. The Rainbow Warriors won the opening two sets, 25-16 and 25-23, showing no real championship hangover in front of over 4,000 fans.

Ball State fought back in the do-or-die third set, taking it 25-22 to stay alive and force a fourth frame.

UH turned on the jets in the final set, 25-17, to let the good vibes roll into Friday night at the Stan Sheriff Center for the banner ceremony.

In front of 6,148 fans, the Rainbow Warriors raised a second banner to hug both sides of the American and Hawaiian flags in SimpliFi Arena and began to celebrate once again.

This time, the celebration may have had some negative side effects for the ‘Bows as Ball State took the opening set, 25-23.

While the Cardinals showed Thursday night that they could compete with Hawai’i, the Rainbow Warriors reminded everyone why they have won back-to-back national championships with an eye towards a three-peat.

The ‘Bows, powered by an incredibly strong energy from the fans in Manoa, won a hard-fought second match, 25-23, to knot things up at 1 set apiece.

Following a brief 10-minute break, the ‘Bows came out re-energized with their stars coming out on display in the vital third set.

The Greek duo, combined with the star-studded line-up of other Rainbow Warriors, continued to roll in the fourth and final set as Hawai’i won, 25-18, to take the match three sets to one to sweep the opening series against the Cardinals.

UH opens the season at 2-0 and looks to keep on rolling next week when they host Saint Francis for a two-game series. 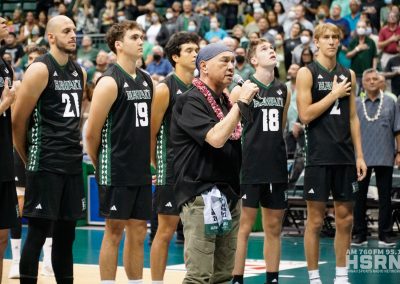 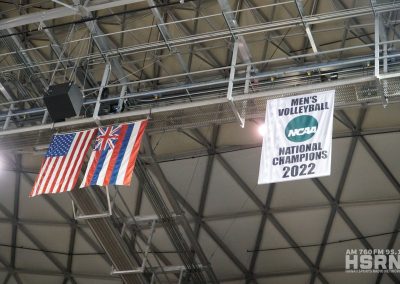 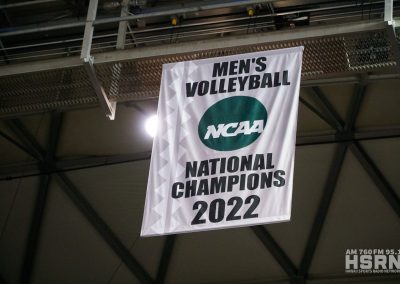 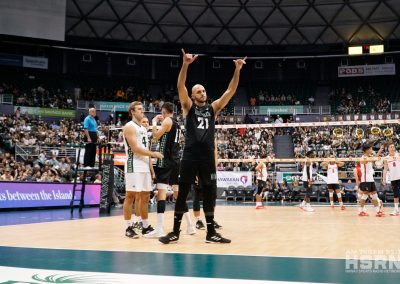 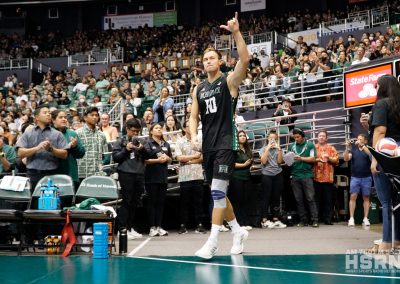 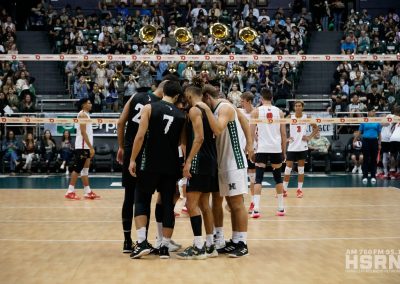 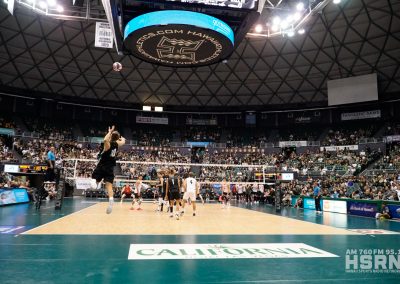 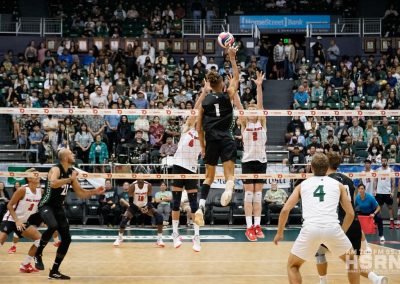 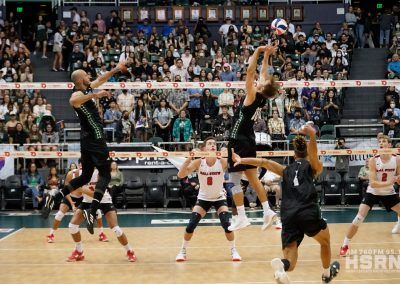 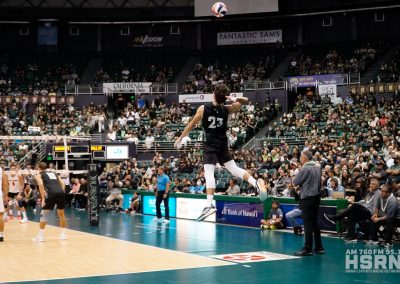 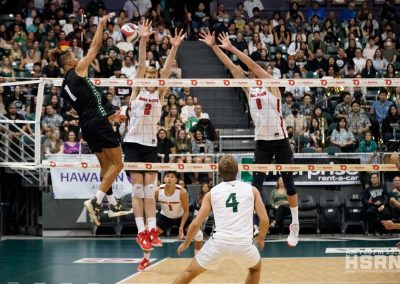 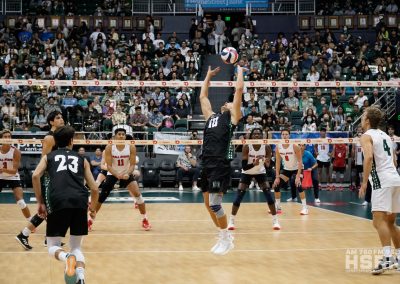 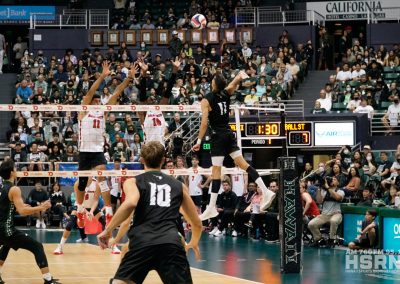 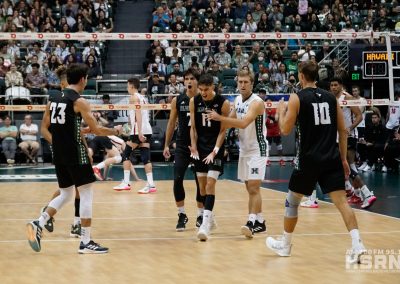 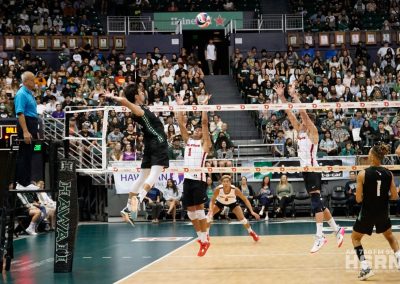 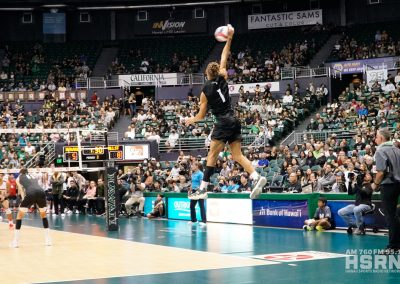 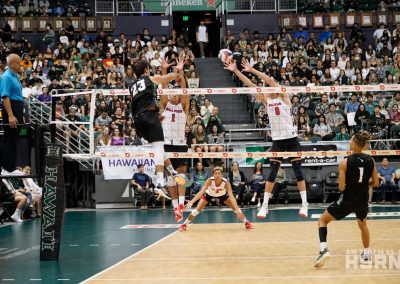 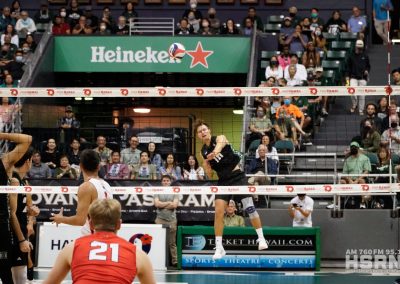 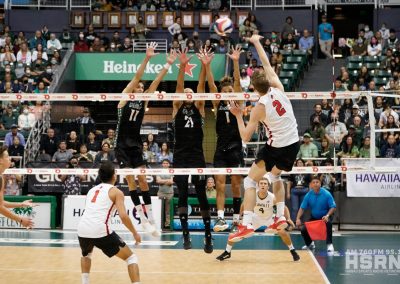 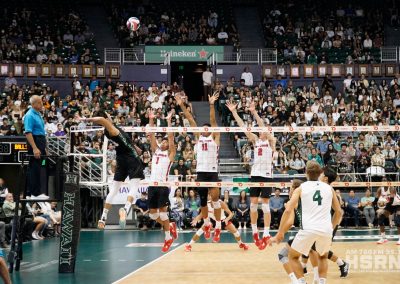 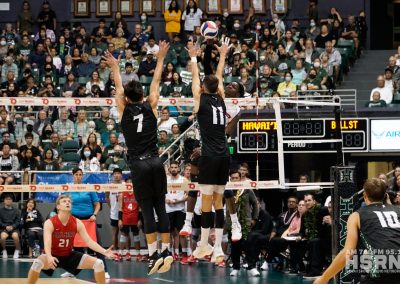 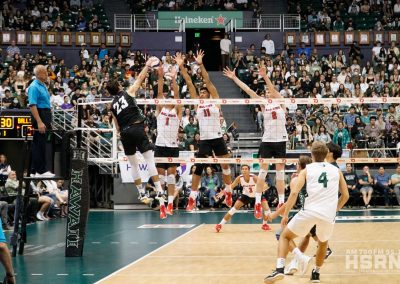