Easton Yoshino would much prefer if he and his teammates got off to faster starts.

The Kaiser senior quarterback is developing a reputation as a comeback kid, though — something that just would not have happened if his team didn’t have such a hard-to-break habit of falling behind.

“We’ve only had one game where we started off hot and kept it going and we’re looking forward to doing that again,” Yoshino told Hawaii Sports Radio Network on Thursday.

One piece of good news is that the Cougars (6-3) will have multiple chances to try. On Saturday, Kaiser faces its stiffest challenge of 2022 when it meets Nanakuli (8-1) in the OIA Division II championship game at the Mililani High field. After that, win or lose, it’s on to next month’s D-II state tournament.

“We think about it all the time,” Yoshino said about the team taking too long to heat up. “Why is it that we randomly click in the second half? We started huddling up after every drive in the Kaimuki game (a 41-32 comeback win on Sept. 24) and then we stopped doing that before bringing it back for the Pearl City game. It’s been working when we get together like that and let each other know what we’re all seeing out there. Halftime always helps too, when we debrief. It’s like we have to see it (the defense’s machinations) first.”

That Pearl City game happened to be the league semifinals last Friday and, on cue, the Cougars trailed 24-7 before mounting a comeback and winning in overtime on Yoshino’s 10-yard TD pass to Makana Naleieha.

A quite similar situation occurred on Sept. 17, when Kaiser trailed the Chargers by 20 points and fought back only to fall short in a 27-21 loss that was made extra agonizing by the fact that receiver Donovan Reis — who caught a Yoshino pass and was headed for the end zone — got tackled at the Pearl City 7 as time ran out.

Starting in the 2019 season when his brother Mason Yoshino was a slotback, Easton has been a four-year Kaiser quarterback, although he did lose the whole 2020 season like everyone else in the state due to COVID-19.

Without a doubt, though, Yoshino’s hallmark capability — in addition to a quick release and timely escapability — is an uncanny ability to avoid the outward appearance of panic. More simply put, he’s calm in the pocket.

“The bigger philosophy that me and my dad (Jesse Yoshino, a Kaiser receiver in the 1990s who was thrust into quarterbacking duty as a senior when the starter was injured) work on as to why I stay calm and not freak out after the first read is because in the game you’re going to get hit,” Easton said. “So would you rather get hit and complete the pass or get hit and not complete it. You’re going to get hit either way.”

Another big plus in that regard, especially as the season progresses and the Cougars’ young line matures, is that there is an offensive unit trust that is continually getting stronger.

“I’m constantly talking to my line out there when we see pressure and I’m telling my running back Kai Blackston to check a certain place and maybe slide out that way,” Yoshino said. “I trust my O-line. They work hella hard.”

If COVID-19 didn’t happen and Yoshino didn’t miss his sophomore season, who knows where he’d be now with four years of experience (and stats) piling up.
“That’s definitely something we talk about all the time as a family,” Yoshino said. “How much more I could have grown and seen in that one year.”

And it is conceivable that he just may have broken the state mark for passing yards in a career.

With his 2,709 passing yards this season (with at least two and possibly four games left), Yoshino has 6,938 career yards, ranking ninth in Hawaii history. Mililani’s Dillon Gabriel, now playing for the University of Oklahoma, is the all-time leader with 9,848.

For touchdowns, Yoshino is already tied for fourth all-time with Mililani’s McKenzie Milton and behind only Saint Louis’ Timmy Chang (113), Gabriel (105) and the Crusaders’ Tua Tagovailoa (84).

“It was really something to see his maturation process, his growth as a young man and a QB,” Cougars coach Tim Seaman said about his starting QB. “He sees the field so much better now as a senior than he did as a freshman. He’s also been fortunate that we’ve had a lot of good receivers come though.

“Physically, he throws a really nice ball and his mechanics have cleaned up over the years. He’s very accurate and also accurate on the move and can throw from different platforms into tight windows.”

One trait Easton picked up from his father and brother is his role as a leader.

“They always stressed that all the eyes are on you,” Easton said. “When you do good, you get praise. When you do bad, they’re looking at you. You have to fight through that stuff, don’t pay it any mind and lead the team.”

After winning the OIA title and its first nine games a year ago, the Cougars got the proverbial rug taken right out from under them in a 48-24 loss to Kamehameha-Maui in the state D-II semifinals

Now, they’re going for a second straight league championship Saturday and it won’t be easy. The Golden Hawks have won eight straight games after a season-opening 16-0 loss to Maui, a Division I team.

“They’re a very tough team and it will be a tough matchup for us,” Seaman said. “They’re very physical and they have size with big skill guys as well. They run hard and play hard and they’ve been really strong on the defensive side of the ball consistently all year.”

One thing is for sure: Yoshino and the Cougars are aiming to start strong Saturday, but, even if they don’t, they’ll most likely at least have the hope of another late-game rally led by the whiz kid.

“We watched Nanakuli play early in the season,” Yoshino said. “They’re a great team. They play really hard and don’t give up. I feel like we’ve prepared well this week and I think we’ll match up with them pretty good. It should be an interesting game.” 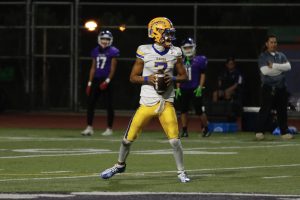 END_OF_DOCUMENT_TOKEN_TO_BE_REPLACED

‘Bows “Know What’s At Stake” Ahead of Important Big West Road Trip By: Paul BrechtMANOA — It was not pretty, but the Hawai’i men’s basketball team took care of business last weekend.  “It’s nice to [learn from mistakes] after a win,” head coach Eran Ganot said before...