MANOA – It was the first home Mountain West matchup of the season for the University of Hawai’i at Manoa football team and the school’s celebration of 50 years of Rainbow Wahine athletics, meaning the Rainbow Warriors’ pre-game ‘Bows Fest was a little extra packed.

Offered before each Hawai’i home football game, fans are invited to come into Clarence T. C. Ching Complex up to two hours before kickoff to try local food and drink vendors, play some football-related games and socialize with fellow UH fans.

21 vendors attend ‘Bows Fest consistently, with food options spanning from the popular Eggs N’ Things to Oh’s Kitchen serving barbeque on a stick with Kettle Corn Hawai’i or Bad Banana’s frozen chocolate-covered bananas for a few of the dessert options. 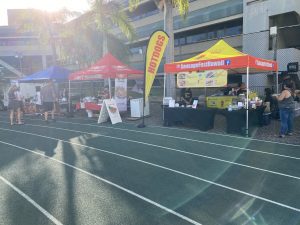 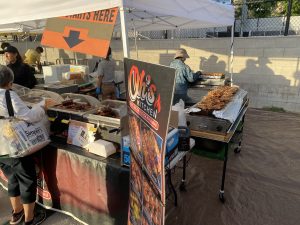 The food options at @HawaiiFootball games with all the food trucks are next level! 🤯🤗#GoBows #BRADDAHHOOD pic.twitter.com/AREfrnUz4G

For those who find themselves parched pre-game, ‘Bows Fest offers a variety of beers like Bud Light, Michelob Ultra and the local Kona Brewing Company’s Big Wave Golden Ale in both 16 oz. and 24 oz. drafts for fans, with prices ranging from $8 to $12.

For fans looking for non-alcoholic options, Perefoti Island Fixx is just one of many options offered during the pre-game festivities with a collection of fruit-based drinks with real fruit in the drink. Island Banana Juice and Haleiwa Cane Juice offer a selection of drinks for fans to enjoy along with the normally offered sodas and water.

The Aloha Spirit was in Manoa for Saturday’s conference home opener, as the fans rolled in for the planned “White Out” for the game. As kickoff creeped closer, fans began to pile in with their white shirts and the field was surrounded in the home white.

The fans seem to be enjoying ‘Bows Fest, a pre-game usual here at UH where fans can enjoy local vendors and their various products. It’s also a “White Out” Night here for the conference home opener and so far the students have showed out for it. #GoBows pic.twitter.com/TiH3Pq7kdQ — Paul Brecht (@12brecht) October 16, 2022

Before the teams entered the field for pre-game introductions, the Hawai’i marching band brought the energy in Manoa up as fans anxiously awaited the Rainbow Warriors entrance.

Thanks in part to a high-scoring game, there was an electric atmosphere at the Clarence T. C. Ching Complex for much of the night. A true family feeling within the fanbase, the energy was positive throughout the game as the ‘Bows did not trail during the contest.

The event staff for UH also did a nice job with fan involvement, playing music that was a good mix between current hits and older classics for the fanbase during downtime of the game and having activities for fans to take part in during quarter breaks, including things such as Follow the Football, T-Shirt Catch and 30-yard Throw and Catch for prizes from game day sponsors.

During halftime, the UH marching band performed alongside the dance team and members of bands and dancers from various high schools on O’ahu to a rousing applause from the home crowd in attendance. The women’s sporting programs also were recognized at halftime in honor of the 50th anniversary of the Rainbow Wahine, much to the delight of the onlookers in attendance.

Mahalo to all those who made our Title IX celebration fundraiser possible! #Wahine50#GoBows pic.twitter.com/CXBs0WPfFV — Hawaii Athletics (@HawaiiAthletics) October 16, 2022

The Rainbow Warriors continued to pull further away from Nevada in the second half, as the home defense put on a dominant display stopping the run and the offense added another 10 points in the fourth quarter as fans cheered on through the final whistle.

With the marching band playing tunes while fans left, the vibes on the campus of the University of Hawai’i at Manoa were as high as any point this season. Often, football teams talk about playing complimentary football where the offense, defense and special teams units all play well to help each other.

The gameday experience at UH, from ‘Bows Fest to game break activities to post game celebrations, was complimentary of each other. An overall delight of a Saturday, as the Spirit of Aloha shined on the fans in attendance for another Rainbow Warriors game day.