Paul Hufanga likes to talk about leadership and togetherness.

A starting center for the Leilehua football team, he knows the importance of uplifting teammates and the value of family while wading through life.

At 6 feet 2 and 350 pounds, it’s hard to think of Hufanga as a baby, but that’s what he is in his own family. As the youngest of nine just starting his junior season, this Mule has been a rock.

And it just so happens that he has also been a guiding force for two other Leilehua offensive linemen, or shall we say linewomen: His sisters — twins Tapaita and Francis who are both seniors — are also in the trenches for the Mules.

“I’ve always been a center,” Paul told Hawaii Sports Radio Network at a recent practice. “I think it helps build me to know how to lead and help out my teammates and my other offensive line brothers and sisters. And in my life, I always try — even though I’m the youngest — to keep my siblings up through all the hard times we’ve been through. Keep them up, keep them happy.”

Aside from the COVID-19 pandemic that threw everyone on Earth for a loop, the Hufangas had to deal with the death of two grandparents within six months of each other in 2020.

While Paul has been playing center since the fifth grade, this is his first season on varsity. Tapaita and Francis, meanwhile, are in their fourth season with the program and second on varsity.

With all three on the varsity for the first time this year, the twins are learning a lot from their younger brother. 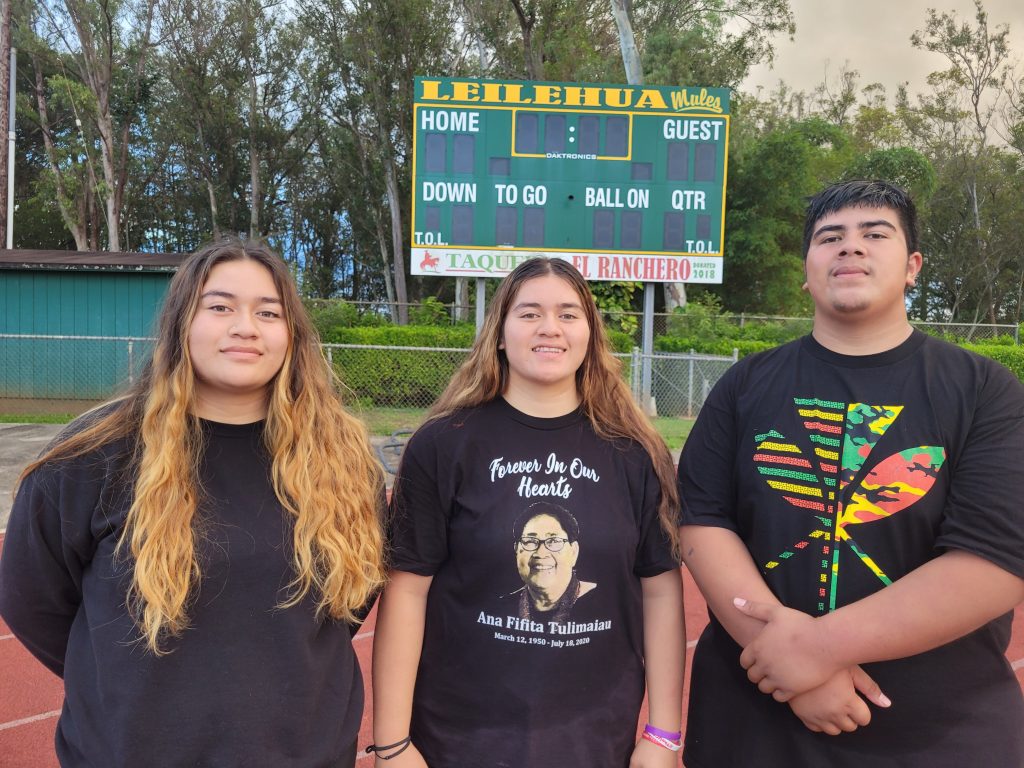 “I try to be that brother on the field, help them out if they get an assignment wrong,” he said. “Ever since they started, they’ve always been tough. They’re always hitting with the big guys.   Indeed, Tapaita earlier this season earned a spot as a starting guard and is now platooning in and out. For now, Francis is out with an injury, but she hopes to be back later this season for Leilehua (0-4-1, 0-3 OIA Open), which dropped its fourth straight game Friday night — 27-7 to Moanalua.

“It means everything,” Francis said about being in the Leilehua offensive line mix with her two siblings. “I have been hoping and dreaming for this. What an awesome opportunity. I love the sport and the contact and the brother- and sisterhood it brings.”

For Paul, he’ll never forget the times during practice when the three of them lined up for snaps together.

“Left guard, center, right guard and we blocked together in the middle,” he said. “That’s pretty cool having your two older sisters blocking with you, especially playing against some big guys.”

Tapaita is also a wrestler for the Mules, and both Paul and Francis may take up that sport in the winter, too. In addition, Tapaita and Francis both throw the shot put for the school’s track and field team in the spring.

“My football highlight is being able to lift up all my brothers and sisters on the team,” Tapaita said.

The Hufanga Leilehua connection goes much deeper than these three.

Brothers Soakimi, Sifa and Timothy, and sister Julia played sports for the Mules, and sisters Ana and Mafi are Leilehua alums.

In addition, mom Lolina and dad Busby are big supporters of the football team, with Lolina often helping out by providing food for the players after games and practices.

At this point, the future plans for the Hufanga offensive line trio are relatively clear.

Tapaita, who is interested in math and human physiology, wants to attend college for one year and then go on a two-year mission for The Church of Jesus Christ of Latter-Day Saints.

Francis, who enjoys English and writing, wants to join the Navy and go to college.

“Having my twin sisters here helps me to go the extra mile,” Paul said. “I’m just a big friendly dude who just likes being with the team and working together and pushing through”

OIA OPEN DIV FOOTBALL: MILILANI 49, LEILEHUA 14The Trojans opened the scoring early and never looked back, routing the Mules 49-14. It was a night of celebration for both schools as it was Homecoming for Leilehua and Senior Night for Mililani.   1Q 2Q 3Q 4Q  FINAL...

END_OF_DOCUMENT_TOKEN_TO_BE_REPLACED

AH YOU FAMILY'S LEGENDARY LINEAGEIf you think about it long enough, it might make perfect sense for the Ah You football family on the North Shore to change their name to “And You.” As in: Who plays football in your clan? … You and you and you and you is the answer....