A sophomore at Kapolei and a senior at Waipahu are creating a major buzz in Hawaii high school football this season.

They happen to be cousins, are both named Liatama, are known to family and friends as ‘Tama’ and are named after their grandfather.

With the season only four weeks in, the Marauders’ Liatama Uiliata and the Hurricanes’ Liatama Amisone have put up big numbers with what can be described as incredible athleticism.

What’s more is the two used to be teammates for the Kapolei Eagles in youth football, and there’s a video circulating on social media showing one throwing a pass to the other in the — get this — 6-AND-UNDER division.

What are kids doing playing that young? Well, in this ever-growing and improving Aloha State football mill, the fruits of a concerted island-wide push of cultivating young talent are being realized more than ever. It’s a sign that the floodgates of Hawaii kids going on to the next level — already open pretty wide — are going to unbolt completely.

Take, for example, what these Liatamas have done in a three games each.

Uiliata, a receiver and defensive back, has 32 receptions for 489 yards and five touchdowns. He also sped and shimmied his way to a 79-yard interception return to seal a 36-25 win over Leilehua.

One stat for Amisone is actually outrageous, maybe even unheard of at any level of the game. In his 54 attempts, he has only FIVE incompletions. His line reads 49-for-54 for 676 yards and 11 TDs. Oh, and ZERO interceptions. And he has also rushed for 149 yards and four touchdowns.

Hawaii Sports Radio Network caught up with both Tamas in a recent phone call. The call was placed to Amisone, but Uiliata happened to be there.
“Tama Uiliata is here to cut my hair,” said Amisone, who’s father Julius is the brother of Uiliata’s mom Crystal. “He cuts our family’s hair. I’m going to get a medium fade.”

Both were named after their papa — also named Liatama Amisone. 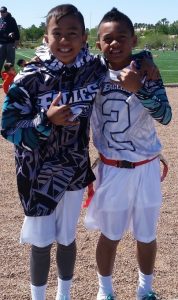 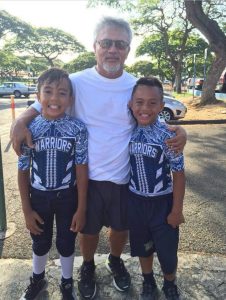 “After our papa passed away in 2021, we both promised to keep our family as one and to watch over the family for him,” Liatama Amisone said. (Photo courtesy of Liatama Amisone) 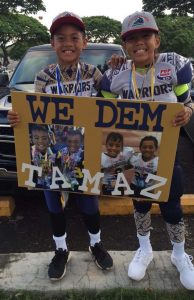 “I remember throwing to Tama for the Eagles in 6-and-under,” Amisone added. “He was the best receiver. He’s like my brother. I talk to him every day. When we were younger, we were always competing with each other to see who’s faster and stronger. Usually, I was faster and he was stronger. At the end of day, we wanted to get each other better every day. Right now, we don’t know who is faster or stronger, but we do know we are somewhere around the same speed.”

And they also assessed each other as football players:

“He (Uiliata) plays with that swag,” Amisone said. “His mentality is like it’s a dog-eat-dog world. He wants to be the king of the field, but not cocky — just to show everyone he belongs out there. He has a lot of skills. Hella shifty, really good hands and has speed and ability to break tackles.” 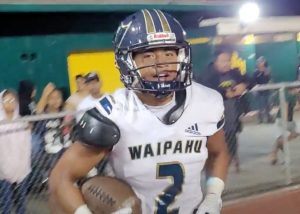 The two Tamas wanted to play on the same team this year, but couldn’t make it happen. Both would love to go on to the next level. Amisone has a long time to figure out that next step. At this point, Uiliata does not have D-I FBS offers, but Waipahu coach Bryson Carvalho has said he believes his Tama has the ability make it there.

Here is what Uiliata had to say about Amisone: “He’s a leader on the field. He has very, very fast feet. And his arm is ridiculous. It’s always been good. I never remember a bad pass by him. Everything is always on point.”

In a recent ScoringLive.com story, Uiliata talked about working on his receiving and defensive skills. He called it his “craft.”

And he expanded on that with HSRN: “I want to have consistent hands, be a warrior on the field, knowing where the players are, recognizing what the players are doing, if they’re high or they’re low, if they’re trying to disguise the play, and checking out their stances and tendencies. If they’re fixing their helmets or gloves, it might be a sign they’re playing hard man (man-to-man defense).”

And his other craft, cutting hair, is something he does on the side.

“I learned it from a friend and he told me the importance of looking good in feeling good about yourself,” Uiliata said. “And so, I want my family to look good and feel good.” 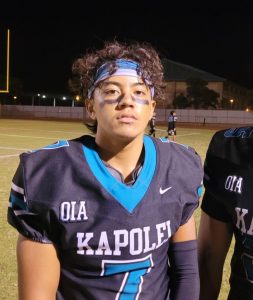 Amisone is part of what could be called Kapolei’s “quarterbackfield.” There’s another guy in the same position, junior Tuli Tagovailoa-Amosa, who is a capable starter and who is 9-for-11 for 91 yards and three TDs and 108 yards rushing in limited action. Even though Amisone has been starting, he looks at it like they’re both QB1.

“The whole summer, they were neck and neck, with only a separation in terms of maneuverability and escapability that put Tama over the top a little bit,” Kapolei coach Darren Hernandez said. “Still, every week it’s a battle. They both have amazing numbers.”

Amisone returns to the field for the Hurricanes (3-0) Friday night in an OIA Open rivalry game at Waianae (1-2).